I finally had the opportunity to get away with my family on a true family vacation. My wife, my two kids, and myself all packed up our belongings for one week out in the mountains; in the tourist getaway city of Gatlinburg, Tennessee.

You probably noticed that my opening statement to this blog contained a sense of desperation with it; a NEED to want to get away with my family on what I consider to finally be a true vacation. Honestly, it was a need. A need to get away from the place we call home, just so we could get lost together in another place completely unknown.

The trip down to Tennessee was super exhausting. Considering that one of our boys is 3 and the other is just a handful of months, my wife and I decided to take a night-drive down to our destination. We knew that we had a 10+ hour stretch of road ahead of us, but we wanted to give our kids the opportunity to sleep through the night as we drove…. I AM NEVER DOING THAT AGAIN!

Haha, it was a tough drive, to say the least. We left at 10:30pm from our home. 2 hours in to the drive, I was feeling good, and my wife and I were chatting up life; it was a fun time! And then…. oh boy; then we were about 4+ hours into the trip. This is where it became difficult. After pumping myself full of Red Bull and a very bad variety of snacks, it was about 4:00am and I felt like garbage. I gave the steering wheel to my wife, and she took over the drive for a few hours.

Finally, however, in the wee-hours of Saturday morning – BAM! TENNESSEE!

Above is a photo of our cabin up in the mountains. The view – spectacular! The drive up the mountain from the base, however, was not. It was about 6-8 minutes from the base all the way up the winding road to our cabin. It was very intimidating. The road was standard-lane width. But there was no room whatsoever for a shoulder. There was barely even enough room for the side white lines to be painted! On one side – rock walls. On the other – 30 to 100 foot drops of… Wilderness! (Its a simple enough way to describe it). Here’s a quick snap of what I’m talking about:

If you notice on the right, as the road curves up, you’ll see a rock wall. On the left, you can kind of see that the road drops-off. Its a bit hard to see, but I promise you that it is much scarier than it looks. But once we reached the cabin: Absolute Beauty. No cars. No civilization. No man-made noise. Just a peaceful atmosphere. Just…….. silence.

AND THEN THE BEARS CAME!

Oh yeah, up in The Smokies, the wilderness is home to black bears! Now I knew this before we took the trip, so I had conducted plenty of my own research on how to handle bear encounters. I read article after article, and I honestly felt prepared. But this was not a 1-bear encounter (as you can probably tell from the photos above). Let me tell you what I learned in my time in the classroom (articles) and the field (wilderness). If you encounter a bear, try to calmly remove yourself from the situation so as not to startle the bear into thinking there’s a hostile situation. But if you encounter a bear cub – RUN LIKE HELL! Haha, I kid of course. Similar caution applies, but its not the bear cub that you need to worry about startling. Chances are that if you encounter a bear cub, then the momma bear is closely behind. And there is a reason as to why there’s the term “Momma Bear” when in reference to a mother (human) who loses her cool.

Thankfully, we encountered bears at the cabin only one night out of the many nights that we spent up in the mountain. The first night actually. And from that night, I made sure every door and window was locked and shut. Yes – locked (as if they would know how to pick a lock). But I digress – the rest of the trip was a blast!

There’s too much to share, so I’m only going to touch on my favorite moments of the trip. So lets start with the obvious: The Food! I heard about a local restaurant in the area called Paula Dean’s Family Kitchen. For those of you who don’t know who Paula Dean is, she’s a Food Network star. She’s also probably the most southern person as southern can be. Haha, I don’t mean that in a bad way. Just look up some videos of her cooking, you might understand. On two occasions, we decided to make the trip to the restaurant, and It. Was. Amazing! The restaurant is not your typical “everyone-orders-their-own-meal” type of setup. This was family-style eating. Here’s a basic description of what that is: When your family gets together for a home-cooked dinner or barbecue, there’s typically only a few options, with mass amounts cooked up so everyone can grab from the pot and eat. This setup was exactly that. Your party gathers around a table, and the table chooses a few items from a menu to share. Those options are brought in large amounts to the table, and everyone grabs from the pot to their liking. Below you’ll see the lunch and breakfast options that we chose.

Lunch consisted of (in order of the picture) cheesy biscuits, creamy mashed potatoes, fried chicken, coleslaw, chicken pot pie, mac n’ cheese, and porky beans. Breakfast was sweet applewood bacon, hash brown casserole, pigs in a blanket (puff pastry), biscuits and gravy (which is the next bowl), pancakes, and chicken and waffles. Everything was So Good!

Excuse me while I get some paper towel to clean my salivating mouth as I sit here reminiscing about this meal.

Ok – now that we’ve covered the food, lets move on to the rest of the trip. While we did spend our days up in the mountains around the forested wilderness, we also had the opportunity to enjoy the aquatic wildlife as well! We visited Ripley’s Aquarium. It was such a good time! (Even though the tickets cost an arm and a leg). 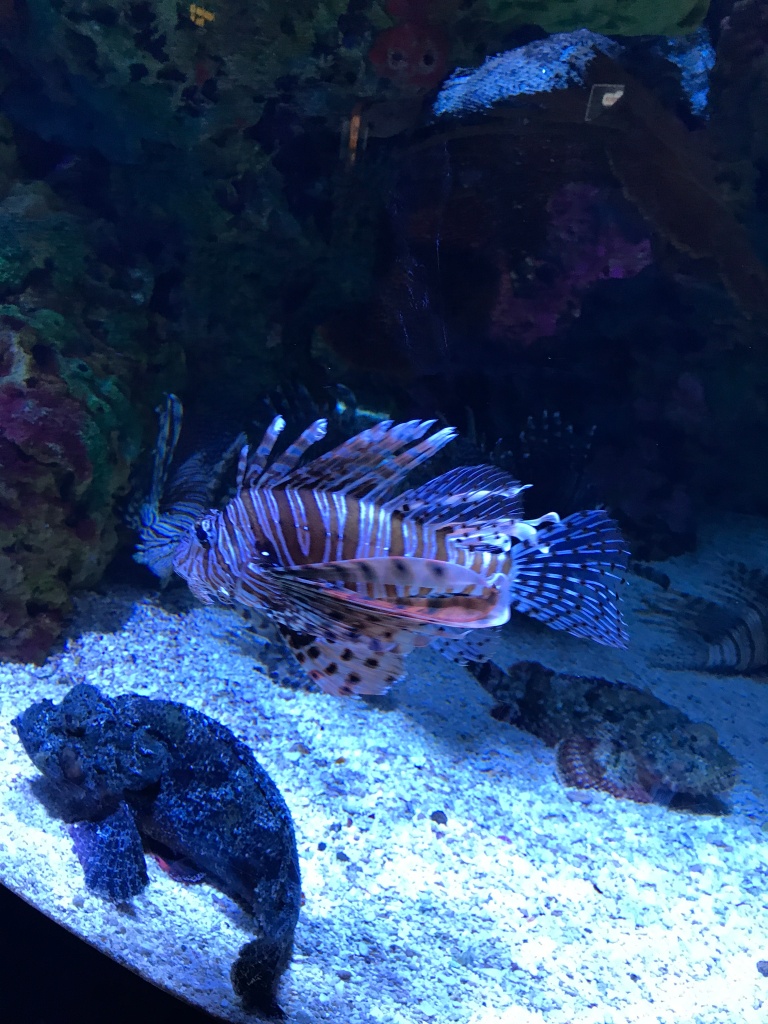 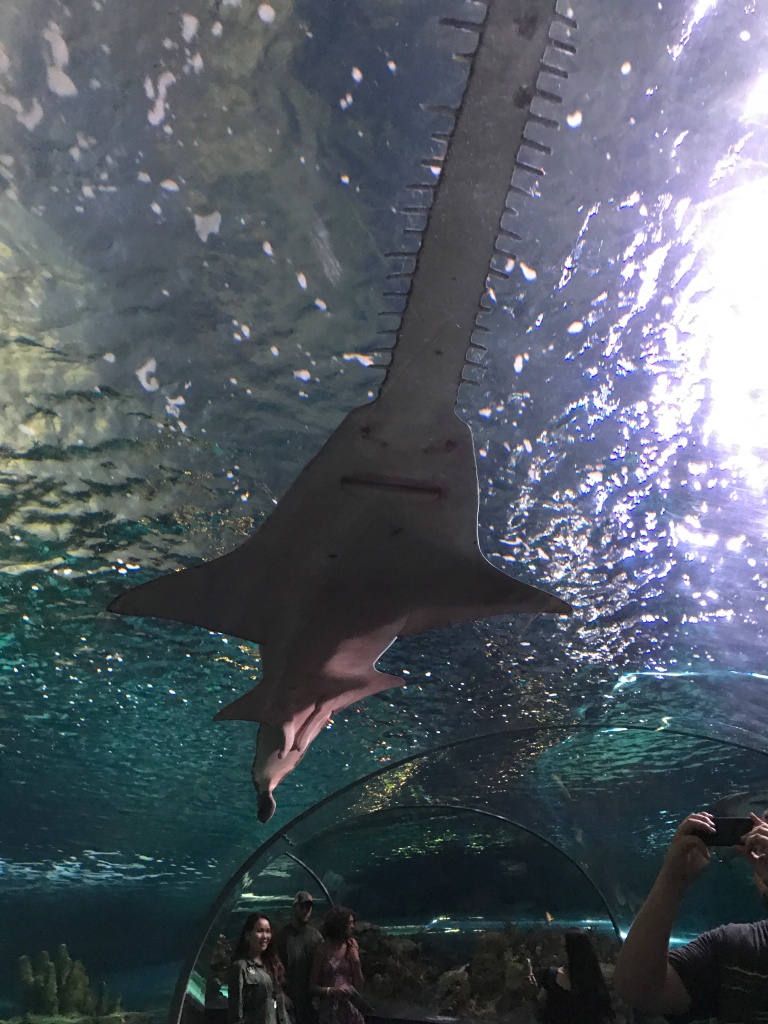 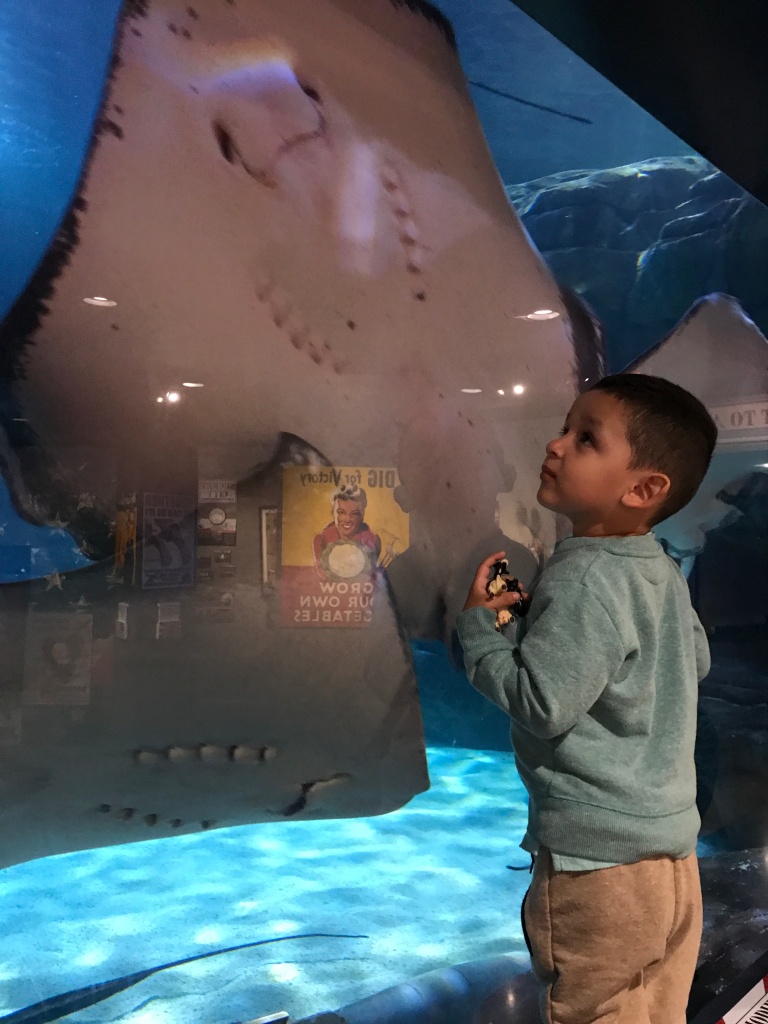 You get a brief preview of the fish that we seen from the photos above. We saw all sorts of small fish, and all sorts of larger fish. Immediately above, you’ll see my son’s face pressed up against the glass as some giant stingrays swim by. It was actually pretty awesome. A bit further up, you’ll notice a giant sawfish, which was amazing! We were walking through an under-water tunnel, and this guy was just hanging out on top of the tunnel! He must have been 10-15 ft. long!

The rest of the trip involved eating, walking around town with the family, and destroying my 3-year-old son at the local arcade!… its hard to come by good competition at this stage in my life, so I have to choose those closest to me as my foes. Besides… I’m his father…. I’m sure one day he’ll run me over in a backyard game of Thanksgiving football. So I have to capitalize on these opportunities while I have the chance. Don’t judge me.

I’m already looking forward to the next family trip!

Make another person read this: